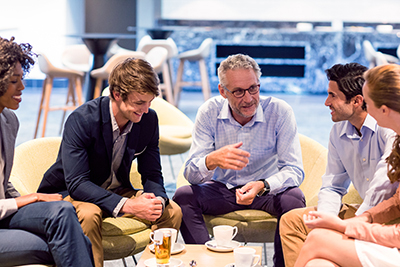 Much has been written lately about the decline of lifetime employment and the rise of the ‘gig economy.’ The notion of the traditional ‘American Dream’—a good job with a defined career path, house, car, 2.3 kids, and 40 years of high-speed jamming towards a pension and the good life—is largely gone. Sure, much of our workplace is still made up of traditional jobs, but it’s changing rapidly. But that might not be a bad thing, especially if we plan for it. And remember the down-side to this model: being stuck in dead-end jobs, heavily reliant on your all-or-nothing employer for pay, advancement, health care and so much more. It’s changing, folks, so what will we do about it?

In the paradigm of lifetime employment, what was crucial was getting on with a good company and working your way up You took on more and more managerial responsibilities as you moved up, and your pay and perks reflected that. But companies have been shedding administrative and managerial jobs for decades, and this isn’t necessarily the best path anymore. In many companies, there are a few leaders sprinkled at the top, but most of the workers are at the bottom rungs. Yet they still thrive, because they’re now compensated—rewarded—for what they can do instead of the position they hold and the time they’ve served. In fact, more people are holding part-time or contracted ‘gigs’ with limited time frames and no benefits. But the pay is nice and those workers who get it can juggle multiple gigs, essentially having a diversified portfolio of work—instead of relying on one (sometimes precarious) all-or-nothing job. Employers benefit, too, since they pay people to bring their best to the workplace more often, rather than carry employees who may or may not be contributing to the mission. But all of this begs a huge question: how can we as a nation facilitate this in order to create good outcomes for workers and business owners? In my opinion, we as a society need to focus on three things, which are described below.

First, we as a society need to guarantee for all access to health care. Not only is this the right thing to do—no one should go without adequate health care—it also frees people to take more risks in the workplace. (You’ll see this as the central theme to my thesis here.) Think about how many people are afraid to strike out on their own—or feel held hostage—because their health care coverage comes from their jobs? Imagine if that limiting factor was eliminated! Oh, the ventures people might take.

Second, we need to guarantee a universal basic income for everyone. That’s right, everyone. If you’re an American, you should realize a portion of its greatness and largesse. We’re the richest nation on Earth; surely, we can share enough so all may be safe. Not only would this eliminate the need for most (all?) social welfare programs, it would free people to strike out on their own. How many businesses might be started if people knew they would at least have their most basic income needs met?

Finally, we need a national human resource development strategy. (I’ve written about this before.) A strategy that connects workers to the work via training and experience. A partnership between government, the private sector, and tertiary (higher) education institutions to define what needs to be learned and how it will be made available to workers. This system could focus on our country’s most critical needs. (Global Warming? Green Energy? Electric Cars? What?) It could be technical at the most basic levels, but the qualifications framework that would result could also include people pursuing higher credentials (degrees, certificates, etc.) that would be related to their career growth.

At this point, I wouldn’t be surprise to hear you say, “Gee, Rich, just a little bit of socialism, huh?” Okay, guilty as charged. I happen to have faith in our collective structures, including government. But let me give you an example that already functions along the lines I’ve laid out, one that has had immense success for hundreds of years: the United States military.

I enlisted in the US Air Force out of high school in 1977. At the time, I had no skills, no job, no car, no education, no money, no girlfriend (ouch!), and no prospects for the future. What a mess! But the military recognized something: potential. That was enough to ensure this young enlisted kid got a basic income, excellent healthcare, technical training, on-the-job training, future career development opportunities, and a chance to work on something important: our nation’s freedom. Great stuff! And all in line with what I’m suggesting for our nation overall.

We’re the wealthiest nation on the planet, by far. But we can achieve our full potential only by tapping into the great potential within all our citizens. Making healthcare, income, and education/training basic components in everyone’s life is the way forward. And the way we’ll be and remain the strongest nation on Earth.